Today, the Texas After Violence Project intern team had the opportunity to participate in a GLIFOS workshop with T-Kay Sangwand, Human Rights Archivist, and Kathryn Darnall, Graduate Research Assistant, both of the UT Libraries Human Rights Documentation Initiative. 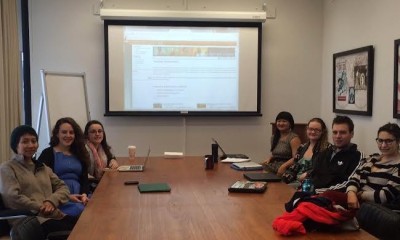 Since 2009, the Human Rights Documentation Initiative has partnered with the Texas After Violence Project to digitally archive the audiovisual oral history interviews collected by the TAVP.  The interviews, which document how the death penalty has influenced Texas communities, are freely available as a resource for public dialogue and scholarly research.  GLIFOS is the software used by the HRDI to sync interview transcripts with interview recordings.  This makes the interviews more accessible as research tools; they are searchable by content, so researchers can quickly find the themes and topics that most interest them within the oral history interviews.

A TAVP oral history interview with Donna Hogan, digitally archived at the Human Rights Documentation Initiative; note the synced transcript next to the video of the interview.

Each student intern is responsible for bringing one entire TAVP interview to completion, from transcription to HRDI archive and TAVP narrator page.  This way, Rebecca Lorins (TAVP Acting Director) and I hope that the students feel a stronger stake in the project, and we also like the idea that they’ll have a shareable “deliverable” to showcase on their resumes at the end of the semester.  Now that the interns have made such impressive progress transcribing, formatting, drafting abstracts, and creating tables of contents for the series of TAVP interviews they’re working on, they’re ready to begin the digital archiving process.  T-Kay assigned them usernames and passwords so that they can log in to the HRDI website and edit metadata in the TAVP portion of the site.

T-Kay and Kathryn offered a useful GLIFOS manual that has been in development since the beginning of the TAVP-HRDI collaboration in 2009.  After orienting the group to GLIFOS Social Media (GSM), T-Kay and Kathryn invited the students to begin the process of archiving their respective interviews.  Thus the “work” part of the workshop began!

Here’s a look behind the metadata scenes on the TAVP HRDI site:

Descriptive metadata fields include interview creators and contributors, languages, geographic foci, and intellectual property rights.  Once the interns filled out the metadata fields, they began the time-intensive process of syncing transcripts with video.  The interns did a great job engaging with the technical aspects of the workshop.  A big thank-you to T-Kay and Kathryn for sharing their expertise and providing the TAVP intern team with such a useful, hands-on digital skill-building opportunity!